Best Wood Lathe for the Money

Choosing the best tool is a daunting task, and some would even say an impossible one. How can a person look at the stars and pick out one that just fits their tastes? The same trouble faces woodworking projects, in particular, woodturning.

When doing woodturning, a wood lathe is required for the work. However, numerous wood lathes currently exist on the market ranging from low-end types capable of doing the smallest of projects to more high-end varieties capable of more complex projects. And with how everyone approaches a project with different skill sets and personalities, finding just the right wood lathe is next to impossible.

However, just like stars in the night sky, some wood lathes do shine brighter than others, ones able to lift themselves out of the chaotic ooze that is the overflooded market and show themselves as the best wood lathes not only for the project, but also for the money. After all, if you are going to spend the money on a tool, best to make every cent count.

While wood lathes are designed with relatively the same purpose in mind, for woodturning projects, how each wood lathe accomplishes this feat is different between models. Some sacrifice speed over adaptability, precision over speed. This model, however, levels off each category, neither sacrificing nor adding any extra to deter from other areas. Due to this, this model in my opinion is the best wood lathe for the money. It does not try to impress with extravagant performance that ultimately sacrifices other key areas. And because it’s not aimed to please one particular group, it has the ability to please the vast majority who decide to use this model. This is marked by it being a midi lathe, one that is placed in the middle of the market between low-end and high-end models vying for dominance. Its price is also fairly average for wood lathes. In all, being average here is a good thing. When the competition gets rough between models that try too hard, this model escapes the drama and takes the crown while the others are distracted. 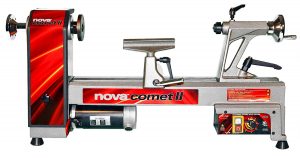 The Comet II has some very enticing features that show it as a middle ground between low-end and high-end models, encompassing both for any kind of woodworker. While many wood lathes are designed for particular projects, the Comet II was designed to be able to do the widest variety of projects possible for a wood lathe. It has a speed range of 250-4000 RPM, which is quite extensive, enabling it to have near limitless potential for projects. A 3-step pulley system provides increased flexibility to an already incredibly flexible tool by supporting the vastly variable speed ranges. This tool was also designed to allow many accessories like a grinding wheel and a bed extension, adding to its incredible adaptability to the widest variety of projects to suit any woodworker’s fancy.

The Comet II presents an impressive 74% 5-star rating, mostly related to its vast array of options for woodworking projects. Other reviews center on that given the tool is designed to be able to do many kinds of projects, it can sometimes be bogged down by individual choices. It is so customizable that it sometimes fails to fit certain individual tastes. It is a jack of all trades, but master of none, which has it fall flat when trying to be fitted for every kind of project and expected to operate at the same level as every other project it is capable of doing.

The competition is heavy between who will claim the spot as best wood lathe for the money. In many instances, this model would get the spot, being a bit cheaper than the NOVA Comet II with comparable reviews. However, the G7943-14 falls just short of kicking the Comet II out, coming in a very close, within a hair’s width, second place. This is because, while the G7943-14 has a lesser price, it also has less features than the Comet II. Having said that, this model still dominates the rest of the competition to be the best wood lathe for the money. It is one of the cheapest wood lathes one can buy that is a bang for the buck, not sacrificing anything to lessen the price. It is quite capable to do the work set out before it, and outperforms the Comet II in many cases as it is not so obsessed with pleasing the greatest amount of woodworkers with increased adaptability. That is not the goal for this model. This model concentrates on capturing the power of more intensive models and focus it in a way best for beginner woodworkers as well as providing backup to more experienced in the trade. Because of this, this model doesn’t have the space to provide the widest adaptability capabilities, but replaces that with its accessibility to beginner and experienced woodworkers alike. 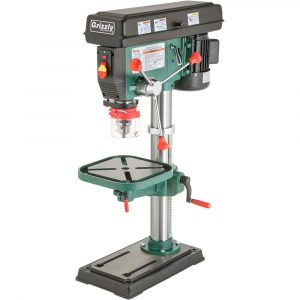 Check out the price of Grizzly Industrial G7943-14

Unlike the Comet II, the G7943-14 does not possess the lowest speed capabilities afforded to the Comet II. It has five speeds, ranging from 826-3337 RPM. However, its swing, for both over bed and over tool are comparable to higher range models such as the JET JWL-1221VS, making this model stand out against its competitors. It acts like a higher end model without the higher end model price. And though it doesn’t possess the speed ranges of the Comet II, its abilities have it as the desirable second choice to higher end models such as the JWL-1221VS, cementing its place as second best wood lathe, arguable the best wood lathe for some who favor the JWL-1221VS, for the money.

The reviews for the G7943-14 are comparable to the Comet II, sitting at 4.⅖. However, it takes only 46% of 5 stars in these reviews. This is mostly due to what comes as a sacrifice of cost. Many reviews complain about the motor of this model, which seems to get too hot too fast with use. This most likely comes from the model being designed to be more high-end than its price suggests, sacrificing an increased price tag for more performance.

The choice for the best wood lathe for the money is subjective. Just as models sacrifice one thing or another to prop up others, so also must the ultimate judgment for the best wood lathe for the money. That being said, the JET JWL-1221VS, while being the top model of wood lathe on the market according to the consensus, is relegated to third on this list given its steeper price. It can far surpass the Comet II as well as the H8259 meant to be a cheaper replacement for this model, but its price outstrips its potential for being first place. Otherwise it would easily be the best choice. However, the race is tight, tighter than it has ever been. While this wood lathe is in third, it is a very close third, so close that its a photo finish with the other two models listed. Only its price drags it back, like a little too much air resistance in a leg race. 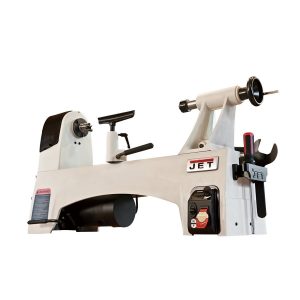 Check out the price of JET JWL-1221VS

The JWL-1221VS has an arguably unrivaled feature that sets it above most other wood lathes, its speed control. This model possesses two kinds of speed control, one that can set the wood lathe to a fixed designed speed, and the other that allows the lathe to be set at any speed within the wood lathe’s range, 60-3600 RPM. This is a patented feature solely for the JWL-1221VS, allowing for the most control over any woodworking project. It also has a digital readout to say what RPM speed it is currently operating at. This is perhaps the justification for the higher price.

The reviews for this model are mostly favorable. It claims 67% of 5 star reviews. Other reviews complain about its price, particularly the stand as its weight requires a particular stand that does not come cheap. It is an expensive model compared to others, but its quality according to reviews appears to be well-assured for a higher end model.

The RIKON 70-100 comes in at a not-too distant fourth place. It is comparable in features to other wood lathes of its kind while also exercising a fairly low standard price for its kind as well. It is smaller than the other wood lathes, capable of only small projects without adjustment. However, this is to be expected given the price. The model justifies its price perfectly with its size and basic features, making it a simple choice for the money on hand. While it wins no prizes, it sneaks into the competition to have its day in the sun as an affordable wood lathe that is surely capable of doing many smaller woodturning projects. 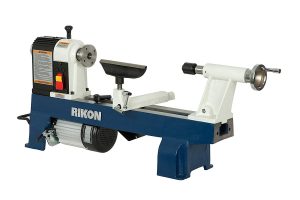 This particular model is designed perfectly for the size of projects it is able to handle. It is best for short and thick carving. Its ability to quickly change speeds as well as its user-friendly interface makes it a true bang for its relatively small buck when compared to other wood lathe models. It also possesses an indexing head, allowing one to lock a piece in place for added precision.

For a fairly average wood lathe, this model also has fairly average reviews, garnering 57% of 5-star reviews. It has been praised for its user-friendly operation for beginner woodworkers as well as those working on a small scale. It has generally been outpaced by more powerful wood lathes, but it remains as an acceptable average tool capable to do the job. It isn’t perfect, but for the money, it does the job to a level of satisfaction.

The competition for the best wood lathe for the money rages on. However, in my opinion, the NOVA Comet II is the one to choose. Other wood lathes have their pros and cons, and some even come so close as to beat the Comet II in many areas. This is to be expected. There are certainly wood lathes than can do a better job than the Comet II with some projects while doing worse in others.

With so many wood lathes on the market, the spectrum of quality spreads across the spectrum. With this being said, the Comet II not only maintains the even ground, but does it so every cent spent on it is spent the best way possible. It spreads its wings the widest, enabling it to do the most woodworking projects. It may not do them perfectly, but it is able to do both low-end and high-end projects with its heightened adaptability. Other models sacrifice this to choose between doing projects easier or more precise. The money spent on this model allows more projects done, allowing for a wider experience rather than a more focused one. The money is spread across the entire spectrum of woodworking projects rather than being dumped into a specific carving or turning other wood lathes are designed to do better than the Comet II. It is simply a choice of utilitarianism. The Comet II is more useful in any given situation given its more flattened out features to spread out wherever it is most needed in the rapidly changing trade of woodworking.