If your current power tool batteries are not quite holding their charge for as long as they used to or are no longer providing you with the level of power you need then you should definitely consider the high capacity Ryobi P122 or Ryobi P108 lithium ion batteries.

Both of these lithium ion batteries are compatible with all of Ryobi’s One Plus 18 volt power tools. They each have a 4.0 Ah capacity meaning they are have a run time that is extra long and have loads of power. This makes them ideal for use by professional tradesmen working on large scale projects.

In this review we will take a detailed and comprehensive look at these two high capacity lithium batteries on your behalf. Based on each of these reviews, we will then make a final recommendation on whether it is the P122 or the P108 that you should buy. 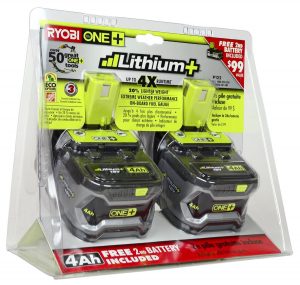 The Ryobi P122 comes packed with loads of capacity and if that is not enough, you get two batteries in the pack. This is the only difference between the Ryobi P122 and the Ryobi P108 – it is basically a two pack of the P108 lithium ion battery.

So because you get two high capacity lithium ion batteries in this pack, it means it provides you with double the level of fun – right? The answer to this is yes! These types of batteries are something that anyone with an interest in DIY or any professional tradesman should have more than one of in their tool box or workshop.

This way you will never have the frustrating downtime of having to wait around for your power tool battery to charge. All you have to do is put one of them on charge whilst the other one is in use. The Ryobi P122 is able to run up to 4 times the life span of regular Ni Cd battery and will provide you with up to 35% increased power as well. This is all thanks to its 4.0 Ah lithium ion battery.

This battery will also feel much lighter than the old style batteries, thus making it a lot easier to use over extended periods and means you will avoid experiencing fatigue and muscle aches.

When using the Ryobi P122 you will see and feel an instant increase in capacity in comparison to the 1.5 Ah Ni Cd batteries which often come with most of Ryobi’s One Plus cutting and drilling power tools. You will also experience an increase in the running time with the Ryobi P122.

On the front right of these batteries there is a power gauge to display to the user how much charge is left in them. Lithium ion batteries are capable of withstanding extremely low temperatures – to the level of below freezing. If they are put on charge when they are too cold, the charger will recognise this fact and then wait until it is warm enough to begin charging.

However, one of the main problems with these types of batteries is the fact that they can not cope with extremely high temperatures. If you were to leave them out in the sun on a really hot day during the summer then do not be surprised if you experience problems when using them.

Check out the price of the Ryobi P122

If you are not going to be using these lithium ion batteries for a period that is longer than 30 days it is recommended that they have at least 50% charge left in them. This is because the batteries, under normal usage conditions, do degrade slowly over their life span of around 3 to 5 years.

Once they come to the end of their life span, lithium ion batteries can be recycled. To do this, simply tape up their contact points and then go and drop them off at any recycle disposal point. This includes landfill sites and participating hardware stores.

What others say about the Ryobi P122

Users of the Ryobi P122 lithium ion batteries are very positive about their quality and life span. Some of the examples of what the positive points include state that the batteries life span is better than the original ones and as a result they bring new life to any Ryobi power tool.

Some users also mentioned how well the batteries fit their other Ryobi tools, including jigsaws and drills, and handily come fully charged so that they can be used straight from the get go.

Jobs that users utilize these batteries on include plumbing, wood working and engineering based jobs. When the batteries do require charging, users have been happy that a full charge only takes 30 minutes.

Some of the examples of what things they said in regards to the negative aspects include the fact that they are not compatible with earlier version of the Ryobi charger and so have had to go out and purchase a new one in order to charge these batteries.

The terminals on the batteries are apparently prone to overheating which has led to, in some certain cases, the terminal melting when in use and in turn completely melting the charger after only a short amount of time. 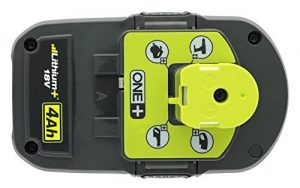 This model of lithium ion battery by Ryobi weighs much less than the likes of their Ni Cd batteries, thus making the power tool it attaches to much lighter and so becomes easier to use, especially for extended periods of time. The battery will operate in extremely cold temperatures. In fact it will continue to work all the way down to just below 14 degrees, which is way past freezing.

It comes with a power gauge on the front that has an LED light display to indicate the level of charge that is left in the battery. This is a highly useful feature that ensures you never run out of charge half way through a job. Ryobi’s IntelliPort charger, which is sold separately, works to keep the P108 lithium ion battery in good condition throughout its lifespan.

Check out the price of the Ryobi P108

One thing to consider with a lithium ion battery is the fact that it does not need to be completely discharged prior to it being recharged. They can also be left on charge for conditioning. If you are planning on storing the battery for any amount of time that is longer than 30 days then we recommend you leave them with between 30% and 50% of charge in it before doing so.

Just like all other Ryobi power tools, the Ryobi P108 comes with a 3 year long limited warranty. This means that if you were ever to experience any issues (this is highly unlikely to happen as Ryobi make quality products) with the battery or if it ever stopped working, within the first 3 years, then you could get it replaced replaced for a new one free of charge.

Users of the Ryobi P108 lithium ion batteries are, on the whole, very positive about their quality and life span. Some of the examples of what they said include how much better the battery is than the old Ryobi batteries. This has led to many users’ power tools becoming much more powerful and faster running.

Similar to the comments regarding the P122, this battery has breathed new life into many users power tools and has meant they can keep their drills, jigsaws, impact drivers etc. rather than getting rid of them. This, therefore, represents good value for money as for the cost of a new battery they have essentially got a whole new power tool. 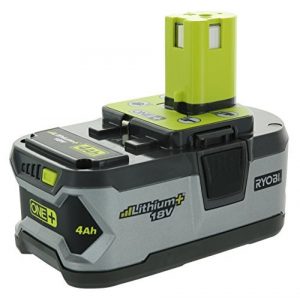 The Ryobi P108 lithium ion battery can be charged using any old chargers providing they can handle both 18 volts and 14.4 volts. Users also like the fact that the battery has an indication light on it that displays to the user how much life it has left in it.

Lots of users also liked how light in weight the battery is which means it can be comfortably used by a whole variety of different individuals, from small to big, strong to infirm, young to old, and female to male.

Also popular is the P108’s reasonable price tag and the fact that it will last long enough to complete the biggest of jobs. When the battery does eventually die then many users stated how fast it recharges back to full charge. It takes about an hour for it to go from completely flat to fully charged. Users recommend to not let the battery discharge too far as this can damage lithium ion batteries and so ends up costing you money.

However, as is the case with the P122, not all users are not so positive about the Ryobi P108 lithium ion batteries. Some of the examples of what they said include that the battery cuts out under any sort of load or pressure, and that it ends up dying after not much use. There was also some issues regarding them not fully charging and the indication light not coming on even when completely charged.

It must be noted however that these cases are in the minority with most of the issues reported being one offs.

Both of these models are basically the same batteries so the decision as to which to buy is solely based on what ever your requirements are and if you are happy to work with just one battery. This is what will determine which Ryobi model to go for in this instance.

If a solitary lithium ion battery will be sufficient for your needs then we recommend buying the Ryobi P108 as it is cheaper. However, if you need constant use of your power tools and you do not have the patience or time to wait around for the battery to charge then we recommend you buy the Ryobi P122 twin pack instead.

Check out the price of the Ryobi P122