Review DeWalt DWS780 – Does the miter saw live up to all the hype?

This is a DeWalt DWS780 miter saw review that will look at some of the main functions and features of this power tool. As well as that we will also compare it to another similar miter saw model and give our thoughts on it.

The DeWalt DWS780 includes a useful sliding function, which make cutting larger work pieces that much easier. It also features a double bevel so you do not need to flip your work piece over when cutting bevels. As you can see this is a super versatile power tool.

It lends itself to use by both home DIYers and professional tradesmen thanks to its higher power, precise cuts, which means it can be used for a variety of different cutting jobs, including decking and fine woodwork. A couple of its best features are a powerful LED light and its 15 amp motor. With this it is able to cut through wood at as much as 3,800 RPM of speed.

Now let us take a closer look at the DeWalt miter saw.

What is included in the box? 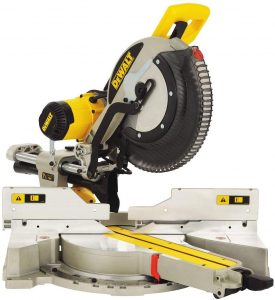 Upon opening the box of your brand new power tool you will get a DeWalt DWS780 12-inch double bevel sliding compound miter saw, a 60 teeth carbide cutting blade, a cutting blade wrench, a dust bag, and a vertical material clamp.

This miter saw can cut a 16 inch work piece at a 90 degree angle. This is impressive compared to other similar models and makes for a versatile power tool that can be used for a variety of different applications. It is also able to cut horizontal miters and vertical bevels at the same time.

This helps to make what would normally be complicated cutting jobs faster and more manageable. The sliding functionality of the DWS780 means that the width it can cut to can increase.

LED better than a laser?

An ultra bright LED light comes include in this power tool as standard. It is found within the XPS cross cut alignment system and works by casting a shadow, from the cutting blade, onto your work piece. This lets you see quite precisely where the cutting blade is going to go through. Lots of people actually prefer this to a laser guide.

It comes packed with a host of different safety features. It has a great dust management system that stops any dust and debris produced by the miter saw from going all over your work space. It also makes it easier to see the cutting blade. The cutting blade has an automatic cover that ensures the cutting blade is only ever exposed to the work piece.

The robust base on the DeWalt means that it sits comfortably on any flat surface and will not move when in use. This keeps you safe when working with large work pieces.

To make things easier when it comes to making angled cuts, the DeWalt comes with ten positive miter and bevel stops. This allows for quick and easy adjustment. This is particularly helpful when making the same cuts over and over again. Once you have chosen the angle you want it at, simply press the cam lock miter button in order to lock it into place.

Additionally, there is an override feature for miter detents. With this you are able to adjust the angle with a good level of accuracy. As this is a dual bevel miter saw, there is no need to flip over your work piece when making bevel cuts. All you need to do is angle the saw to either the left or the right. This is particularly good for when you are working with crown molding.

For ease of use the DWS780 comes with a fence that allows you to see right through it. This means you are able to see exactly what you are cutting when using the power tool. For safety purposes it comes with a cutting blade guard to keep you safe from injury.

The miter saw weighs 56 pounds so is too heavy to move by yourself, it is really a two person job. For those who can move that much weight there is a handle at the top which makes it that bit easier to lift. Compared to other similar models, the process of changing the cutting blade on the DeWalt is very easy.

Simply loosen the two bolts holding it in place and it will slip out to be replaced. Cutting at an angle is made really easy thanks to the power tools double bevel feature. A high visibility scale is used to adjust the level of degrees. This allows you to see exactly what you are doing.

This is a good looking miter saw with some serious attention to detail paid to every part of it. Its high quality robust design is backed up by its performance. The black and yellow DeWalt colors stand at and make it super recognizable as one of their power tools. It will add a great touch to any workshop or construction site.

What’s Not Good About this Miter Saw Model

Although the miter saw is marketed by DeWalt as a power tool for fine woodworking it is not appropriate given that the cutting blade that comes with it as standard. The 12 inch cutting blade has 60 teeth and is more suited to general woodworking, such as framing lumber.

For fine woodworking we suggest buying a better quality cutting blade, preferably one with between 90 and 100 teeth. Some of the customer reviews state that the slides can be quite tough to move. We found that it is definitely not as smooth as some of the other models currently out there. Also the power tool is made in Asia and not in the United States.

How does it compare to the DeWalt DWS782?

There is not a huge difference between these two models. The main difference is that the DWS782 is a more scaled down version of the DWS780 and so is somewhat cheaper. As you would expect then it does not come with some of the features that the DWS780 has. One of these is the XPS cross cut alignment system.

Check out the price of the DeWalt DWS782 miter saw

How does it compare to the Bosch GCM12SD?

The Bosch is similarly priced to the DWS780. Its sliding action is super smooth, whereas the DeWalt’s is quite sticky. However, the GCM12SD is both 9 pounds heavier and 4 inch bigger than the DWS780, making it less portable and easy to transport from job to job.

It does have a smaller footprint of ten square feet than the DeWalt though, but this does come at the cost of no rail.

Check out the price of the Bosch GCM12SD miter saw

Our Verdict on the DWS780

So at the start of this review we posed the question of whether the DeWalt DWS780 miter saw lives up to all of the hype. We think it is clear from what we have looked at that it really does. What we particularly like is the power tools large cutting capacity of up to 16 inch.

We also like the XPS cross cut alignment system. These two features allow you to do lots more different jobs than most other similar models currently available on the market and to a good level of precision. Where we are disappointed is the cutting blade that comes as standard with the miter saw.

It simply is not conducive to producing those finer finished that are sometimes required. However, this can be easily rectified by changing it for a cutting blade with more teeth. The miter saw is also on the slightly heavier side. Overall, the DeWalt performs well and comes with lots of power. We would recommend it to both DIYers and professional tradesmen alike.