Although they may not be the best quality power tools, Porter Cable do make ones that are cheaper and generally more affordable that are aimed at beginners and less experienced DIYers. So if this is you, read on.

The PCE345 jigsaw was released by Porter Cable back in 2014 but since that date it has gone through a number of versions, each one bringing new and improved functions and features.

As part of these changes the power tool has become much more stable and now boast a whole range of options that were not available when the PCE345 was first introduced. One of the main differences is that the latest version has a greater level of usability. This is something that was missing in the earlier renditions of the jigsaw.

This being said; given the price range that Porter Cable power tools fall into and the audience they are aimed at, you should not expect too much when purchasing the PCE345.

How does the Porter Cable PCE345 Jigsaw come out of the box?

The first thing you notice is the light weight of the jigsaw which weighs in at just over 5 pounds. This is pretty light weight compared to the likes of the DeWalt DCS331M1 and Bosch JS470E, some of the best jigsaws available in the market. It comes with a 6 amp motor that is able to generate up to 3,200 SPM and a speed dial with an orbital mode for optimal results. 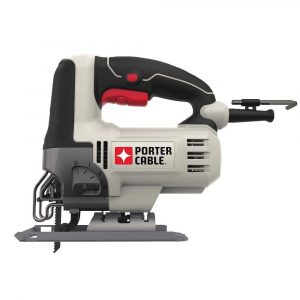 This speed dial aids those wood workers who are seeking perfection in their work. Similarly, the PCE345’s orbital setting provides you with the smoothest of results when cutting through a range of different materials.

This jigsaw is simple to set up and easy to use. You can literally take it straight out of the box and begin use. This makes it perfect for home DIYers and more inexperienced wood workers. It is also suitable for experienced professional tradesmen who simply require a cheap jigsaw for a particular project or just for a few years of use.

The ergonomically designed handle has a large, bulky molded grip which means you can get a nice firm grasp on the power tool. This is an important aspect to any jigsaw as a strong grip allows you to move the cutting blade exactly where you want it.

The PCE345 is a fault free power tool that can provide you with a high level of performance…providing you know what you are doing with it.

Using the speed dial on the PCE345 is pretty self-explanatory. In order to get the best results, you should always start with the lowest speed setting, moving it up to the seventh setting if the cutting blade and the material easily mingle.

The lowest speed setting on the dial is the safest one to use. With tougher materials the cutting blade may halt. If and when this happens, simply increase the speed. The speed dial setting also affords you some room for practice and provides you with the opportunity to understand how the jigsaw works at different speeds. 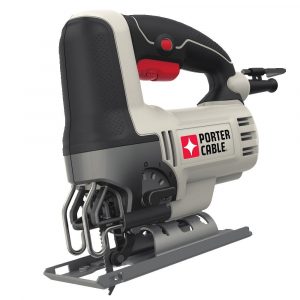 This is designed to aid adaptation of the cutting motion of the jigsaw itself. Beginners and those with little experience of using power tools often make the mistake of assuming that the speed dial and the orbital mode are the same things.

They are, in fact, two completely separate things that help to address different parts of the range of motions of the cutting blade. The orbital action is similar to that of a pendulum. It works by assisting the cutting blade in moving back and forth between two extremes depending on the requirement of the user.

This is important as it affects how well the blade cuts through the material. However, not all materials are the same as some are less or more dense than others. For this reason you have a couple of mode selections.

A Good Jigsaw for the Price

Although the PCE345 may be a good jigsaw for the price; it certainly is not the best cutting power tool currently available on the market. But that does not matter as it is targeted at home DIYers and users with lesser experience who do not want to spend significant amounts on a power tool they will rarely use.

This is an approach Porter Cable take with all of the power tools they manufacture and not just with jigsaws. They also provide mitre saws which are aimed at everyday wood workers. That being said, the PCE345 comes with a couple of features that are very rarely seen in jigsaws from other manufacturers.

One of these is a dial that sets the cutting blade speed which has seven steps. It also features an orbital dial, which is useful when cutting through the less conventional types of work piece. It means that you can easily cut through materials such as pinewood, aluminium, oak wood and lots of other things.

What others say about the Porter Cable PCE345 Jigsaw

Online reviews from Porter Cable customers and users of the PCE345 are pretty positive. Some examples of these include:

“Saw performs exactly as needed. Great for the price. Bought some extra t type blades for it to keep on hand. This is an “ORBITAL” jigsaw. This tool has four orbital settings. This means that as you are cutting difficult materials you can set the blade tip to angle back and forth into the cut to cut into the material easier. Works great when cutting tight circles or arcs. You can visually observe this by slowing the speed on a jigsaw while you adjust the orbital action. When viewed from the side you can watch the blade not only cutting up and down but also moving back and forth.”

“This is a very good saw, feels very solid and well made. There is little to no vibration, unlike cheaper saws I’ve owned. Easy to control, cuts straight and square, and has adjustable orbital settings (for slower, smooth cuts or faster, ripping cuts). Yes it’s twice as much as a “budget” saw, but I would say it’s twice as good (if not more). Save yourself some time, hassle, and money in the long term and buy this before you consider a budget saw.”

However, it was not all good for the PCE345 in term of customer feedback. Some examples of the more negative reviews include:

“The sight marker notch does not line up with the blade. The notch is therefore useless. My first few cuts were at high speed and seemed to be straight. When I used slow speed I always got a curve at the beginning of the cut both with and without using a guide. (Perhaps I was doing something wrong but I returned the saw for that issue). The speed adjustment is in an awkward spot as part the trigger.

It is therefore impossible to adjust the speed during a cut. On picking up the saw by the handle my fingers reached as far as the trigger and I had to be careful not to press the trigger while picking it up. I learned to avoid it not squeezing my index and middle fingers together. There should have been more room at the handle to avoid that issue.”

“Inaccurate alignment and have big problems with the blade staying in the saw. I have to whack the blade into the holder on a bench top for it to stay in while in use. I have tried both Bosch and DeWalt blades. Poor service from Porter Cable, no replacement, just take it to a service center. You certainly get what you pay for. It did save my butt, but was not a patch on my cordless DeWalt that seized after 10 years.”

Compared with other similar jigsaws currently available on the market, the Porter Cable PCE345 comes with some added functions and features that are highly useful. The fact that it is much cheaper than others is also a bonus, so you will not mind if it gets put through the mill or badly handled whilst out on the work site.

Based on these facts, we definitely recommend this jigsaw to those individuals who can get by with adequate results within a wide range of different applications and wood working projects.