Milwaukee vs DeWalt vs Makita vs Bosch: What You Can Expect From Each Brand

This review will compare four of the biggest power tool brands currently on the market – Milwaukee, Dewalt, Makita & Bosch. We will start by detailing each of their respective histories and then investigate how their combo kits compare. Finally, we will pose the question of which power tool brand is best?

Formed in 1924 in Milwaukee, Wisconsin, this brand started off by repairing power tools. This was until they manufactured an electric hand drill, specifically designed for car engineers at the Ford company. From there on Milwaukee went on to manufacture lots of other power tools.

This included hole shooters, which were used by engineers building military planes in World War II. It was some years after this that the company properly revolutionized things with their Sawzall reciprocating cutting saw. Until this very day Milwaukee have remained at the forefront of the power tool industry.

The American company was too formed in 1924 by Raymond E. DeWalt. During World War II the company grew rapidly in order to meet the needs of the government’s military needs. This expansion saw them setting up a subsidiary in Canada.

Over the following years the company added even more space to their plants in order to meet increasing demand for their products. It was in 1992 that the company introduced its first range of portable power tools. Dewalt remain at the forefront of the power tool industry with the introduction of the world’s first ever cordless framing nailer in 2013.

Makita was formed in 1915 and originally started off as a power tool repair company. It was not until 1969 that the company created its first ever power tool in the form or a rechargeable hand drill. This was actually the first of its kind in the world.

It was in 1886 in Stuttgart, Germany that this company was formed by Robert Bosch. It started by making improved spark plugs and ignition systems, before it ventured into manufacturing power tools many years later. Its first being the hammer drill.

From then on the company expanded into several other industries, including the automotive industry and telehealth. Bosch is also responsible for inventing a number of engineering based products, which include eBike drives and the hydraulic lift.

A Tool on Tool Comparison

To help decide which one of these brands is the best we will look at a tool combo kit from each. This will help to give an overall impression of each brand’s power tools. 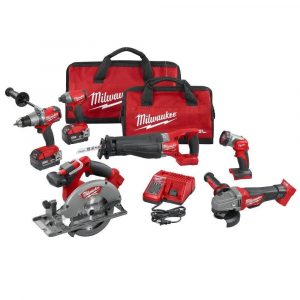 The Milwaukee combo kit is made up of six different pieces and includes a 6.5 inch circular saw, a 0.5 inch hammer drill, a 0.25 inch impact driver, a 4.5 inch angle grinder, a reciprocating saw, 2 x 18 volt batteries, a charger, an LED light, and a contractors bag.

It is evident from as soon as you handle these tools that they are real quality. There were no corners cut in the manufacture of any of them. They are both light and sleek, yet long last and robust. Most importantly, however, they all perform really well.

The batteries are truly awesome. They can fully charge in less than one hour and should last you through the entire day.

Its 20 volt hammer drill comes with lots of torque, more so than that of the Makita. However, it is also heavier and bulkier than the Makita. The cutting blade on the circular saw is made from a robust carbide material. This helps to provide a high quality finish to every cut it makes.

All of these tools fit nicely into the contractors bag, allowing for them to be moved from job to job.

The hammer drill can perform all the same jobs as that of Milwaukee’s, but it did not do these jobs as fast and there was a lot more strain being put on the battery. The batteries tend to run out of charge fairly quickly when put to use on the tougher jobs.

The Bosch combo kit is made up of a flashlight, a circular saw, a grinder, a reciprocating saw, a cordless jigsaw, 3 batteries, and a charger.

Bosch’s reciprocating saw has a trigger, which allows the user to vary the speed, and features to different speed ranges. Featuring active response technology, the hammer drill will automatically stop when it gets bound when in use or when it is hung up.

Check out the price of the Bosch PSB7MM3C combo kit

After examining their products, it is clear to see that all four brands produce comprehensive combo kits. However, some are more comprehensive than others.

It is quite obvious, in our eyes, that the power tools of Milwaukee are superior to that of any of the other three brands.

Compact Router Comparison Review: Makita vs Dewalt Ryobi vs DeWalt vs Makita vs Milwaukee – Which has the best cordless tool set?