In our review we will be looking at two of the best wood planers currently available on the market from two of the biggest power tool brands out there: Makita vs Dewalt planer.

Wood planers are a vital piece of kit for any professional wood worker or hobbyist alike. They are what allows you to make high quality finished wooden products such as a piece of furniture. When you are making the decision on which brand and model to purchase, there are a number of things you should consider.

These include the quality of the cut that the power tool produces, as well as its ability to handle snipe. The second one is particularly important as ensuring the wood planer does not leave rough edges on its cuts will mean that you save money on not having to buy extra lumber because of damage.

Makita and DeWalt are both famed for producing the very best power tools. When putting the 2012NB and the 735 head to head it will become apparent that many of their features and functions are very similar. 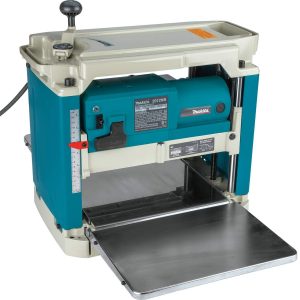 This model has just one speed setting that can deliver up to 179 cuts each and every inch. Despite the Makita having a single speed it easily reduces the height and smooths the surface of any pieces of wood that are fed into it. Having a slower speed would be an extra positive feature of the 2012NB.

The cuts per inch can be easily modified thanks to the dual speed gear box. Cuts per inch in the slow gear is only 96, but in the high gear the number of cuts per inch increases to 179 – the same as the DeWalt. In the slower gear the planer has a much more delicate touch, whereas the opposite is true in the higher gear.

The DeWalt DW735. This is due to the fact that it provides the user with a higher level of control due to it having two different speeds. However, for shaving and smoothing the 2012NB is a good power tool. But with the DW735 you get more options.

Next up we will look at the cutting capacity of the two power tools.

The 2012NB has a dual cutting blade system that allows for wood boards with a height of 6 inch and a width of 12 inch to be cut down to size. The cutting depth on the 2012NB can also be adjusted by less than an inch per each pass.

The DW735 boasts a tri cutting blade system that allows for smoothing and levelling of wood boards that are as much as 6 inch tall and 13 inch wide. Like the Makita, the cutting depth on this particular model can be adjusted by less than an inch per each pass.

If you consider the cutting capacity alone then it is a tie. But if you were to consider the width of wood board the planers can cut then it would be the DeWalt that is the winner as it is capable of cutting 13 inch wide boards, as opposed to just 12 inch with the Makita.

A dust collection hood comes as standard with the 2012NB. It can be attached to a vacuum through the dust port to pick up all the wood chips and general debris. Although, the system does not work very well and struggles to collect all the mess it produces.

This planer has a wood chip ejection system in place so that any debris that is created by the power tool are fired out at the back via a chute. The wood chips come out at a very fast speed so we advise attaching a bag or a hose to the end to avoid injury from errant debris pieces.

The dust collection capability of these two wood planers is pretty similar. However, it is the DeWalt’s system that is the slightly better of the two. The only negative point of the DW735 is that the vacuum ports is very loud. 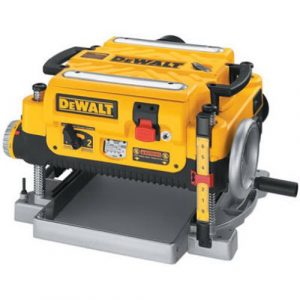 The DeWalt planer too has a 15 amp motor but can produce a greater cuts per minute than the Makita – almost twice as much at 30,000. This means that it produces cuts that have a much cleaner and smoother finish.

The DeWalt DW735 as it has a much higher cutting capacity (almost double) than the Makita.

All though we have not looked at every single function and feature of the Makita 2012NB and the DeWalt DW735, such as their size or weight, or the speed at which the cutting blade can be changed, what we have investigated are the main points that should aid your consideration.

So after considering each of these things, we have determined that it is the Makita 2012NB that is the best of the two wood planers and gets our recommendation for purchase. Although it does not deal with snipe very well and does leave some marks on the wood, these are both things that we can live with.

We have no doubt that the DeWalt DW735 is a power tool that is more than capable of handling any heavy duty task that you put it to. Therefore, it is our winner here today.

What is the Best Jointer Planer Combo in 2020?