An impact driver is one of those power tools that until you have used one, you wonder how you ever got things done before it. This is most definitely the case with a cordless impact driver. Increasingly you will find more and more professional tradesmen, and home DIYers, putting aside their cordless drills and instead using a higher powered impact driver.

However, when you do decide to do this, the question of which particular brand and model to purchase becomes of paramount importance. If you do not go for the right impact driver for your needs then it can be an expensive mistake. To help you with your decision we are looking at two of the best power tool brands currently out there – Makita vs DeWalt.

After we put these two head to head we will make our final decision on which we recommend for purchase. So without further adieu, lets start the review. 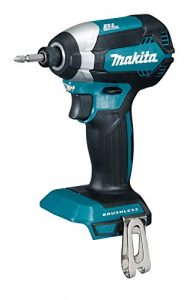 This is a particularly powerful impact driver that comes with several high quality features that make it stand out from the rest of the crowd, such as being dust and water resistant. This is particularly useful for professional tradesmen who will be working on construction sites in all sorts of conditions.

What others say about the Makita DTD153Z Impact Driver

On the whole those who have used this power tool are happy with it, stating its great level of torque and its high power as the main positives. Other positives include the LED light, its ability to handle any size job and the fact that it is cordless, meaning it is super versatile and can be used anywhere.

Check out the price of the Makita DTD153Z

This model has been dubbed by some as the best of the best when it comes to impact drivers. It is capable of delivering lots of torque and boasts a no load speed of up to 2,300 RPM. This makes it ideal for more heavy duty tasks like driving fasteners into hard materials such as concrete and metal.

The DCF880N-XJ is the perfect power tool for both home DIYers and professional tradesmen alike.

What others say about the DeWalt DCF880N-XJ Impact Driver

Most users of the DCF880N-XJ seem impressed with this power tool. Most noted is its high power and extended battery life compared to other similar models. Users also commented on the build quality of the impact driver and the amount of time it has saved them on jobs.

Check out the price of the DeWalt DCF880N-XJ

One of the main features to look at when considering which impact driver to purchase is its torque value. Impact drivers are able to pack a punch that cordless drills and other power tools simply can not.

Both models have 18 volt drivers that enables them to generate up to 2,250 inch pounds. The DeWalt has a torque value of 203Nm compared to the Makita’s 107Nm. So the winner here is the DeWalt DCF880N-XJ.

Both of these impact drivers use lithium ion batteries. Given the power tool’s respective compact sizes, the batteries work to provide lots of power. Like the batteries of most other impact drivers currently available on the market, both the Makita’s and the DeWalt’s battery’s are compatible with plenty of other power tools.

This means that the DeWalt’s batteries last twice as long as those of the Makita before they need charging. Their lifespan is also longer. Because of these facts, the DeWalt DCF880N-XJ is the winner here.

Most power tools nowadays are cordless meaning you can go anywhere with them and use them in any sort of work space. This is also true of these two impact drivers. With both the Makita and the DeWalt running on lithium ion batteries they easily retain energy.

Similarly, they can also be charged very quickly and are much more affordable should you ever need a replacement battery. This allows you to work with out any interruption – until your battery need charging that is.

We recommend using a battery pack that is well suited to the specific impact driver you go for. Both the DTD153Z and the DCF880N-XJ fully charge super quick, last for a really long time and utilize lithium ion battery technology, so it is a tie.

On top of being compact and lightweight, these two impact drivers also have ergonomic designs. This is something you don not find with many cordless drills and so they are much less comfortable to use. The DTD153Z and the DCF880N-XJ each have an anti slip rubber moulded handle that provide extra comfort to the user.

This is particularly good when using the impact driver for extended periods of time. They also both come with a magnetic bit holder meaning your loose bits are easy to access and kept safe at all times.

The variable speed trigger on each of these impact drivers aids an easy change during any task, making them perfect to use for both home DIYers on simple jobs through to experienced tradesmen on more complicated jobs. As both the Makita and the DeWalt have the same features, it is a tie

If you have ever been juggling equipment at the top of a set of ladders whilst you try and support the heavy weight of a cordless drill then we are sure you will appreciate the light weight of both these models. They are equally easy to manoeuvre, so it makes them ideal for longer jobs or those within tight work spaces.

Out of the two models, it is the Makita that is the lighter. It weighs in at over 2.8 pounds, with the DeWalt slightly heavier at over 3.5 pounds. This is not a huge difference and is probably not that noticeable when you hold the two together at once. However, because of this fact it is the Makita that wins this one.

Having considered the comparisons of the two impact drivers, along with each other their individual functions and features our recommendation is the DeWalt DCF880N-XJ. Not only did it win more of the head to heads with the Makita DTD153Z but we also feel that on the whole it is a better power tool.

What we particularly like about the DCF880N-XJ is its high level of power and torque. It means that pretty much whatever job comes its way, it can handle it with ease. It is an all rounder that can be used by those with little experience as well as being appreciated by those with plenty. We can see why some say it is the best of the best in the world of impact drivers.

Check out the price of the DeWalt DCF880N-XJ

Makita Impact Driver Review: All You Need to Know