These power tools are also sometimes referred to as biscuit joiners and have become super popular as of late. That is because they are able to create a strong connection between two pieces of wood. In this article we will look at two plate joiners from a couple of the best manufactures out there, Makita PJ7000 vs DeWalt DW682K.

We will then answer the question which one of these two power tools is the best one. 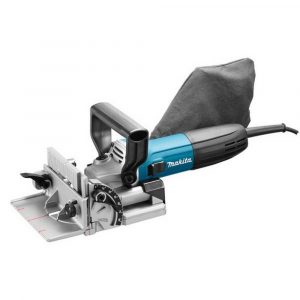 This model comes equipped with a 5.6 amp motor that can generate a maximum speed of 11,00 RPM. It can cut to a maximum depth of 20mm. Because of its relatively weak motor it struggles slightly when dealing with more dense materials.

However, thanks to the high speed of plate joiner it means that the cuts it makes are super clean (providing the material is not too dense). It has a trigger with a single speed and lock on button. With its strong build quality, the PJ700 lends itself to commercial use by a professional tradesman.

Made out of cast aluminium, the fence assembly is let down by the fact that it has rubber patches rather than grit covered faces or metal claws that help to keep it stable. There is also a cheap feel to the plastic levers.

The PJ700 is good at minimising the amount of dust and debris it produces. The cutting blade is completely surrounded, which means everything is funnelled directly towards the dust port. The dust bag that comes included is particularly useful when working on projects within a confined work space.

The dust bag is secured using a crimp bar, as opposed to a zipper, and this can become difficult to open once and dust gets in the teeth. We also found the crimp bar fit quite loosely meaning some dust and debris is able to escape. For ease, we recommend attaching a vacuum cleaner to the dust port instead.

Cutting blade changes on this plate joiner can be done easily and quickly. Simply loosen the one thumb screw and press the button for the spindle lock. No specialist tool or screwdriver is required.

The Makita’s fence is adjustable horizontally and is held by a lever. For fine adjustments there is a knob connected to the pinion.

Check out the price of the Makita PJ7000 plate joiner

The DeWalt comes with a 6.5 amp motor that can deliver as much as 10,000 RPM of speed, meaning it is more than suitable for commercial use by a professional tradesman. This power is accompanied by a superb build quality, with a metal gearbox, and magnesium gear housing and fence. 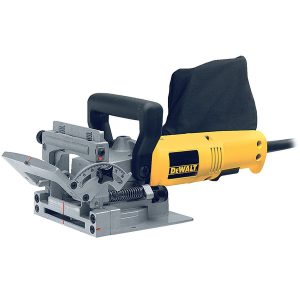 Its trigger, that has just a single speed, has a lock button for easy operation. This power tool, like most other plate joiners, is made up of two separate parts. These are the fence assembly, which is used for positioning the cutting blade, and the motor unit that powers and houses the cutting blade. In order to make a cut you must move the motor unit down the fence assembly.

The DW682K works well it handling the dust and debris that is produced during operation. This is partly because the cutting blade is fully enclosed and so the cut is full covered also. Any dust that is created gets ejected from the plate joiner via the dust port. One minor gripe is that the vent for the exhaust port is positioned towards the user, meaning any dust or debris it ejects comes your way.

To prevent the dust port from clogging up, we suggest plunging slowly when cutting through soft wood. The dust bag that comes with the DeWalt works reasonably well but it is quite cumbersome. To solve this problem along with the issue of the clogging you can attach a vacuum cleaner.

The cutting blade that comes with this plate joiner is 4 inch and is made from carbide. It can make deeps cuts and also comes with a 2 inch cutting blade for making more shallow cuts. The way the cutting blade is attached, via a spindle lock and four screws, means there is little chance of it ever coming lose. However, this does mean that a lot more time and effort is needed to change the cutting blade when required.

The DeWalt’s fence assembly comes with a vertical adjustment, one pinion, and two tracks. This I a helpful design that allows both sides of the fence to move in unison and keeps the fence in line with the cutter. On the left of the fence is where the angle adjustment is located.

At any position along the 90 degree angle range the fence can be locked in place by a thumb screw. The angle gauge has a high level of accuracy of plus or minus 0.25 degrees.

Check out the price of the DeWalt DW682K plate joiner

Out of these two plate joiners it is the DeWalt DW682K that is our favourite. The cutting blade changes on this power tool are not the easiest, but its level of accuracy and over performance is better than that of the Makita.

The fence is also super reliable and delivers a greater amount of power so makes light work of cutting through both soft and hard woods.

Check out the price of the DeWalt DW682K plate joiner

DeWalt vs Makita vs Bosch – What Brand Makes The Best Power Tools? DeWalt DWE75SB vs Makita 5007MGA – Which Circular Saw is The Best?