In this review of the DeWalt DWS780 vs Makita LS12161 we will be looking at two compact miter saws that both deliver loads of power, as well as a high level of cutting precision. By the end we will answer the question of which miter saw is best.

So let us start by taking a detailed look at the Makita LS12161. 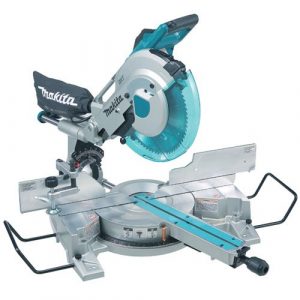 The Makita comes with all the accessories you need to get started using the power tool straight away, as well as a few random miscellaneous items. These include a 60 teeth TCT cutting blade, a vertical vice, a wrench, a dust bag, and a triangular ruler.

Armed with a 15 amp motor this miter saw makes light work of cutting through a variety of materials, including metals, woods and plastics. We do recommend using the appropriate cutting blade for each of these different materials.

The powerful motor can generate a speed of as much as 3,200 RPM. This is a little slower than that of the DeWalt and of most other miter saws currently available on the market. The motor utilizes a direct drive system that has an electronic control for the speed.

These types of motors perform consistently over time without ever losing any speed. This is contrary to the belt driven motor in the DeWalt that may get loose over time.

The LS12161’s compact design means that it is easily portable. It is also simple to set up and easy to use. Once operational you can use the miter saw’s four rail sliding system that enhances rigidity and improves cut quality.

The stand that the power tool sits on has three different positions. These include being sat on the ground, being slightly above the ground, and being in a full standing position.

This miter saw can be used for a variety of cutting applications. Where it is particularly good is working with nested crown molding, more so than the DeWalt. Its cross cut capacity at 90 degrees is an impressive 15 inch and the maximum thickness it can cut through is over 3 inch.

Even though this is made of plastic it is still relatively robust and hard wearing. It is also pretty easy to use. Just flip the switch, slide it into position and then simply lock the rails in place.

Check out the price of the Makita LS12161 miter saw

Now it is time to take a detailed look at the DeWalt DWS780.

The DeWalt too comes with all the necessary accessories to get you started using the miter saw straight away. These include a 60 teeth carbide cutting blade, a vertical clamp, a blade wrench, and a dust bag. 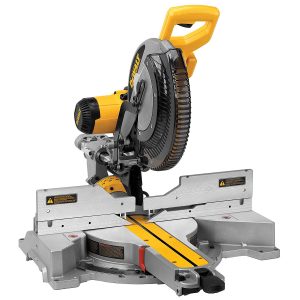 Just like the Makita, the DWS780 too has a powerful 15 amp motor. It is capable of generating as much as 3,800 RPM of speed. With this amount of power at your disposal you never have to worry about have to cut through the toughest of materials.

Thanks to the DWS780’s compact design and light weight it is easy to transport from job to job, more so than the Makita. The miter saw is also easy to set up and intuitive to use.

The miter saw’s fence holds the cutting blade guard securely in place. When it comes to changing the cutting blade, this is a simple task. All you need to do is loosen the couple of bolts that hold the blade in place.

The DWS780 can also be used for a variety of cutting applications. As previously mentioned it is not as good as the LS12161 in dealing with nested crown molding, although it is perfect for general fast cutting.

The cutting capacity of this miter saw sees it being able to cut a maximum of 16 inch at 90 degrees. This is 1 inch more than the Makita and makes the DWS780 highly versatile. An example of its versatility is the fact that it can both vertical bevels and horizontal miters simultaneously.

Having looked at these two power tools in detail and compared them against one another, it is now time to answer the question of which miter saw is best?

For use it is the DeWalt DWS780 that is the best miter saw out of these two models. This is because it is easier to use than the Makita and is also more portable. Other things that tipped the decision in favour of the DeWalt is its greater maximum speed, the fact that it can handle complicated cuts very quickly, and that it can make both vertical and horizontal cuts at the same time.

However, if you are a Makita person then do not despair. The LS12161 is still an impressive power tool that can perform most jobs that come its way; it is just that the DWS780 is slightly better at doing them.

DeWalt DW872 vs Makita LC1230 – Which metal cutting saw is best? DeWalt vs Makita vs Bosch – What Brand Makes The Best Power Tools?