DeWalt vs Makita vs Bosch – What Brand Makes The Best Power Tools?

This review will look at three of the largest power tool companies that are out there right now in DeWalt vs Makita vs Bosch. We will start by detailing each of their respective histories and then investigate how their combo kits compare.

It is only after this that we will be able to decide which of these three illustrious brands is the best at producing power tools. So let us begin by delving into each of their histories, staring with that of DeWalt.

The American company was formed over 100 years ago in Leola, Pennsylvania by the inventor of the radial arm saw, Raymond E. DeWalt. Some 20 years after DeWalt was founded it was bought by American Machine & Foundry Co., who then later sold it to Black & Decker.

As of 2013 the company has used parts that have been manufactured in Italy, China, the United Kingdom, Brazil, the Czech Republic and Mexico. The finished products are assembled in the United States.

It was in 2016 that the company launched their innovative ‘FLEXVOLT’ battery pack with hybrid voltage. DeWalt now produce over 200 different power tools and 800+ accessories.

Makita originally started off as a power tool repair business. It went on to manufacture its first power tool in 1969. The fully rechargeable hand drill was the very first of its kind at the time.

Thanks to this success, Makita began manufacturing a wider range of power tools. Most recently the company expanded into gardening tools and equipment. As of 2012 the power tool manufacturer began production in Thailand, and continues to do so until present.

This power tool company has a rich history given it was formed over 130 years ago in Stuttgart, Germany by Robert Bosch. It originally began creating better ignition systems and spark plugs. It was not until some years later that they began producing power tools, with the invention of the hammer drill.

Since then the company has been involved in a number of different industries, including telehealth and automotive, and invented a number of innovative engineered products, including the hydraulic lift and eBike drives.

In order to determine which of these brands is the best one, we will now take a detailed look at each of their respective combo kits and how they compare to one another. Looking at the combo kits is the best way to get an overall impression of the brand as they each include a variety of the company’s power tools and accessories. First up is the DeWalt combo kit.

This combo kit comes with a hammer drill with three different speed settings, an impact driver, a 6.5 inch circular saw, a work light, a reciprocating saw, two 20 volt batteries, a battery charger, a belt hook, and a contractors bag.

The hammer dill comes packed with loads of torque, easily outperforming that of the Makita’s. However, it is both heavier and bulkier than the Makita hammer dill. The circular saw comes with a carbide cutting blade.

The contractors bag that comes with the combo kit is big enough and strong enough to safely carry all these in. 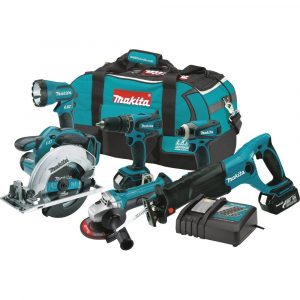 The Makita combo kit includes 6 of their best power tools. These are a hammer drill with two different speed settings, an impact driver with variable speeds, a 6.5 inch Makita circular saw, two 18 volt batteries, a charger, a work light, a 4.5 inch angle grinder, a reciprocating saw, and a sturdy bag to carry them all in.

The impact driver is almost identical to that of the DeWalt’s. The only difference is that its maximum RPM speed is marginally higher. However, its level of torque is the same. It is also slightly lighter and so easier to use for extended periods.

All these power tools and accessories come with a robust bag that is more than big enough to carry them all in. 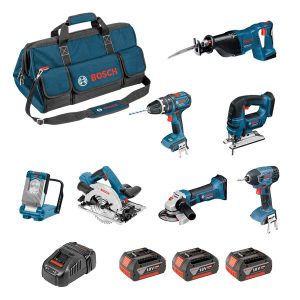 The Bosch combo kit comes with several different power tools and accessories. These include a grinder, a cordless jigsaw, a circular saw, a reciprocating saw, a flashlight, three batteries, and a charger.

The reciprocating saw comes with a trigger that allows the user to vary the speed, as well as featuring two speed ranges. The hammer drill includes active response technology, meaning it will stop automatically should it get bound whilst still in use or when it is hung up.

This is a really nifty safety device that could potentially help you avoid serous injury.

Check out the price of the Bosch PSB7MM3C combo kit

All three of the combo kits we have looked at in this review include a comprehensive range of high quality power tools. Although this was a difficult design, it is the Makita XT601 18V LXT combo kit that just edges it. In second place it is the DeWalt DCK590L2 combo kit, and in last is the Bosch PSB7MM3C combo kit.

In the end it was the long battery life of the Makita’s batteries and the lean and sleek design of all their power tools that swung it for us. DeWalt came ahead of Bosch for their inclusion of an impact drill, something that the Bosch combo kit does not include.

However, ultimately the decision comes down to your own personal brand preference and what you will likely be using the tools for. All we can do is advise on our favourite and wish you luck on your purchase.