If you are looking for a DeWalt DWS780 miter saw review then you are in the right place. We have taken an in depth look at the power tool to provide you with some honest feedback, detailing what we like about it, what we do not like about it, and how it benefits the user. 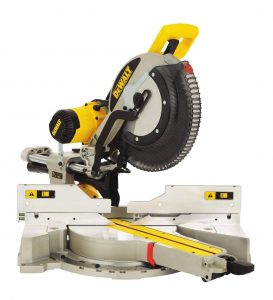 What comes in the box?

The DWS780 comes packaged in a transparent box meaning you can see exactly what you will be getting if you make a purchase. Inside the box there is the miter saw itself, along with a single dust bag, a single carbide cutting blade, a single blade wrench, and a single vertical clamp.

What is good about the DeWalt DWS780?

This power tool has been specifically designed for making precision cuts, so lends itself perfectly to heavy duty work, such as cutting through thick timber, as well as more delicate woodworking jobs.  It is pretty lightweight (56 pounds) which means it is also portable and easy to transport. This makes it the ideal miter saw for professional tradesmen who have to travel from job to job.

Check out the price of the DeWalt DWS780

The DWS780 is predominantly used for making accurate cuts and so it comes equipped with an LED light as part of a cross cut alignment system. This does not need re-calibration, which is a handy feature. The power tool makes very smooth cuts and so no sanding is required afterwards, saving both time and effort. Compared to other miter saws currently available on the market, the DeWalt is a lot more durable.

This is thanks to the tough metal plates that it is made out of which are capable of enduring the hardest of work. It is powered by a strong 15 amp motor that can generate up to 3,800 RPM.

The DWS780 can make beveled cuts at a wide range of angles with the adjustment for these being both accurate and easy to make. The miter saw’s handle has a cam lock. From right out of the box it is perfectly aligned so can be used straight away. The DeWalt definitely comes with lots of positive points.

What is bad about the DeWalt DWS780?

As is the case with most other miter saws currently available on the market, the dust collection feature on this model is poor. The bag fails to catch any of the dust or debris that is kicked out meaning it goes all over your work space instead. This can be both annoying and dangerous, particularly when working indoors. The power tool itself is also prone to getting clogged up with dust and debris.

To combat this problem with the dust and debris the DWS780 does have the facility for a vacuum cleaner to be attached to it so that the mess is instantly sucked up rather than going all over your work space. The clamp that comes in the box with the DeWalt not very well made at all and really struggles to keep your work piece in place. However, if you do go out and buy another one, or use your own, do be aware that there is no surface on the miter saw to attach it to.

The miter saw is not made in the USA and is, instead, made in Mexico. However, even with these few bad points it is still a great power tool and comes with a limited 3 year warranty.

The DWS70 is a power tool that perfectly lends itself to precision woodworking. It is also very easy to use and is super portable. In comparison to this, the DWS782 is another excellent miter saw from DeWalt that probably makes superior cuts to the DWS780. This is because it slides much easier and makes cuts in difficult positions. 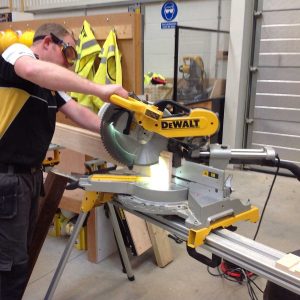 However, unlike the DWS780, the DWS782 does not have an LED light. This is one of, if not the main reason, why most people go for the DWS780 instead when deciding between the two models. This is despite the fact that the DWS780 is also significantly more expensive.

Both of these miter saws are quality power tools by DeWalt though and neither one will leave you feeling disappointed. It really and simply comes down to your own personal preference and what it is you want, and expect, from a miter saw.

So after reviewing the DeWalt DWS780, the question we need to ask is if we think this miter saw is worth your hard earner cash. Our response is yes, it most definitely is. It is one of the best miter saws currently available on the market as it comes with a whole range of cool functions and features that will make your woodworking life much easier, even if you are just a recreational DIYer.

For those out there that want their work to be highly accurate whilst making precise and clean cuts then this power tool is the one for you. However, if you cannot handle a dirty work space then you may want to look at another model with better dust collecting capabilities as this one creates lots of mess. As is the case with most of these decisions, it really comes down to what you personally want. From a miter saw.

On the whole this would make a good buy and is backed up by many positive reviews across the Internet.

Check out the price of the DeWalt DWS780