A Comprehensive Review of The Dewalt DW 745 Table Saw

As far as table saws go, Dewalt is a recognized brand in the industry. The DW745 is one of the company’s top units that have attracted many users. And if you want to discover why this is so, then you might be in luck.

In this Dewalt DW745 article, you’ll find our reviews of the power table saw. We’ve also added tips that might help you when you want to buy a table saw.

So, let’s cut to the chase and get right into the review. 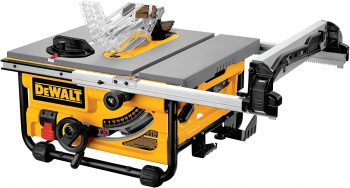 If you are thinking of getting a quality power table saw, then consider the Dewalt DW745 saw. It is a portable and compact unit that’s easy to use. As a table saw, it would fit almost any space, and it is ergonomically designed.

The unit has rack and pinion rails. So, you can easily and accurately adjust the fence. Thanks to its powerful motor, the table saw cuts through planks and hardwood like butter.

You’ll get a miter gauge, a blade guard, and a push stick with this DW 745 unit.

As the name implies, these saws are designed for mobility. They are not made from heavy and sturdy materials. Generally, portable table saws have 15A, 120V motors and are divided into the following types:

Bench-top saws do not have stands or wheels and should be used on a table or bench. They are directed towards enthusiasts who want to work on projects in their workshops. These tables have compact with a rip capacity that can handle small and medium-sized jobs. The DW 745 is an example of a bench-top portable table saw.

Compact table saws are closely related to bench-top saws. They are not made from heavy materials, which makes them lightweight as well. However, the underlying difference between them and a bench-top saw is that they have stands. Still, these portable saws could have other features like sensors that some bench-top saws don’t have.

These saws are bigger and have a rugged look. As many contractors use them to handle heavy-duty jobs, jobsite saws are also known as ‘the contractor saw.’ They have more features than compact and bench-top saws and high-performing motors. However, the downside of this table saw is that they might not be suitable for beginners.

The presence of a creatively designed stand is an easy way to spot jobsite portable saws.

These saws are much bigger and powerful than portable saws. Generally, stationary table saws are mounted in a workshop. Some units have advanced features like a router table, an outfeed table, and fence rails. Find some best router tables here.

These saws are confused for portable jobsite saws. Professionals use them to work on large projects. They have at least one induction motor and belt drives that make it easy to saw materials.

Stationary contractor saws have high performing motors, and most of them weigh anything between 150 and 300 pounds.

Cabinet table saws are the most powerful units you can get. They are sturdy and made from durable construction materials. They have accurate fences and motors that deliver between 4 and 6hp in every operation.

Cabinet saws are heavy. In general, they weigh nothing less than 500 pounds, which affects their portability significantly.

These units have features of both cabinet and contractor saws. For example, some have stands and inboard induction motors. They weigh as much as 300 to 600 pounds. The board of these saws houses the powerful motor, instead of it being on the outside like other stationary hybrid saws.

Here are some safety features in a portable table saw:

These safety options are used to prevent kickback. Kickbacks occur when sawed materials are directed back at the person cutting.

The riving knife is placed at the back of the cutting blade and follows the motion of the blade. On the other hand, the splitter is located at a distance from the blade.

Woodworkers use splitters to prevent the cutting material from getting pinched by the teeth of the blade.

It’s not safe to push the material to the blade with your hands. So, portable saws have push sticks that make setting the material easier.

The function of a blade guard is to protect your fingers from being cut by the blade.

Only a few portable table saws have this feature. These switches turn off the blades during power outages. So, they’d prevent your blade from starting immediately there’s power.

It is a good practice to carry out frequent checks on any portable table saw before using it. It’d help the table saw to perform more effectively and efficiently.

Is the blade adjustable?

Yes, the blade on the DW 745 can be adjusted. However, the adjustments on the blade have been made at the factory. Still, if you want to readjust it:

Does the table saw have a power button?

Yes. There are two buttons on the DW 745 table saw. While the green one puts the machine on, the red button turns it off.

If you know a thing or two about table saws, you’ll know that there are so many options to pick from. So, it might be tough getting the perfect portable unit that would make sawing easy.

The Dewalt DW 745 might be the table saw you’ve been looking for to make sawing stress-free. It has a decent horse-power and an impressive cutting speed. It’s also affordable with a 90-day money-back guarantee. What other feature would you like in a portable table saw?

CLICK HERE FOR PRICE
Makita Impact Driver Review: All You Need to Know A Review of the Husqvarna 450 Rancher Chainsaw

How to Change a Table Saw Blade

A Review of the Best Portable Jobsite Table Saws