It is hoped that this DeWalt DW717 vs Makita LS10161 review will help those individuals who are confused about these miter saws, from two of the biggest power tool brands around, choose the right one to suit their needs.

To help with this, we will look at each of the circular saw’s functions and features in depth, as well as detailing some of their pros and cons. So let us begin by looking at the DeWalt DW717 miter saw. 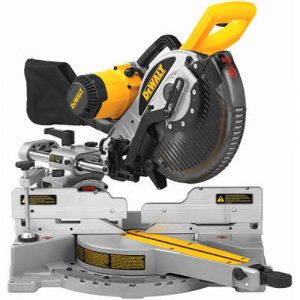 This compound sliding miter saw can be used by both home DIYers and professional wood workers alike, although the expensive price tag may put off those individuals who only plan to use it on the odd occasion. It is appreciated by the professionals thanks to its adjustments, cutting capacity, and most of all its customizability.

The fence on the DW717 can be removed in order to enable you to do tasks with it that most other saws simply can not handle. This is thanks to its cutting capabilities, which are better than most other miter saws currently available on the market.

The sliding capability of this miter saw makes it easy to cut 12 inch long. This is something that a none sliding compound miter saw can not do. By removing the fence, you are able to extend the cutting capacity to as much as 14 inch. When metered at 45 degrees it can make the same cuts 8 inch long.

The DeWalt has a 10 inch cutting blade and is able to make a variety of different cuts. As well as cross cuts and vertical cuts, the power tool can also make miter and bevel cuts. Its dual bevel feature means you are able to make bevel cuts in either direction (right and left) so there is no need for you to flip your work piece over to change the bevel cut direction, saving time and effort.

The DW717 has positive stop detents for the bevel and the miter gauge. This means it is faster to set up and cuts can be repeated much more easily as there is no need to adjust the cut every time. Similarly, the power tool also has an adjustable depth stop.

With this feature you are able to set how far down the cutting blade goes. This means you are able to cut grooves into you work piece without actually cutting all the way through it. This is something that usually has to be done on a table saw.

This should help to collect as much as 80% of the dust generated by the miter saw.

Check out the price of the DeWalt DW717 miter saw

This compound dual sliding miter saw is a large, strong power tool. In fact, it is the largest miter saw currently available on the market. This means that it is super tough and can cut through a range of materials with great ease. However, its large size does mean that it is heavy and difficult to transport. It also does not lend it self to use on jobs where space is at a premium. 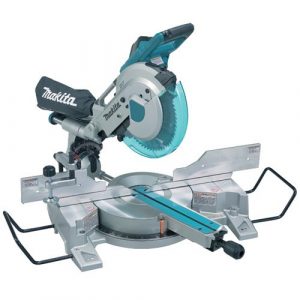 The LS10161 comes with a four steel rail sliding feature. With this you are able to perfectly cut through a variety of different materials. It also helps to greatly improve the rigidity of cutting through any material.

It boasts six linear ball bearings, which helps the Makita to make accurate cuts. This feature minimizes the need to readjust the cutting angles. Something else the miter saw uses to make more accurate cuts is an LED laser cutting guide. However, on this model it can be difficult to see and pinpoint the guide exactly.

The LS10161 also has another in built feature that helps to improve the quality of the cuts it produces. It works by counteracting the operator’s sloppy workmanship to produce cuts that do not look sloppy.

Check out the price of the Makita LS10161 miter saw

So we have covered all the main functions and features of these two models of miter saw. Each has their pros and cons, and outperforms the other one in some certain aspects.

However, it is the DeWalt DW717 miter saw that performs the best over most aspects and is undoubtedly our favourite out of the two models. The things that swung the decision in the way of the DeWalt were the facts that it boasts a great cutting capacity, its ability to make a variety of cuts, and the fact that it has a greater level of versatility then the Makita.

Ultimately, this decision really comes down to what you are wanting from a miter saw and which brand you have used before and have an affinity for.

Check out the price of the DeWalt DW717 miter saw