With any DeWalt power tool you know what you will be getting is a high quality product. This is particularly true of all their compound miter saws. As well as offering the latest and best miter saws with all the features and functions you would ever want and need.

DeWalt do also offer models that take a more ‘no frills’ approach and are more reasonably priced, but will still do a job as well.

And this is exactly what the DeWalt DW715 15 Amp 12 Inch Single Bevel Compound Miter Saw is. It does not come with any of the ultra modern functions and features, but what it does come with is a power, sturdiness, versatility and a compact, lightweight design.

It is easily able to function both in the home, where it is occasionally used for light jobs, as well as on a busy work sites, where it will be put to some serious use. 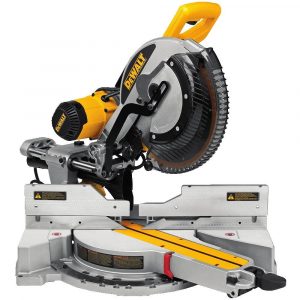 It performs on the highest level, whilst being compact enough to take up minimal space and being light enough to be easily moved around, thanks to it weighing 42 pounds and coming equipped with a convenient carrying handle. The weight is well distributed throughout the miter saw, which means it is not awkward or difficult to carry and, again, lends itself to easily being moved around or transported.

The DW715 is powered by a very strong 15 amp motor that generates a 4,000 RPM no load speed. With such high power, cutting moldings, framing and all other cutting tasks are very smooth and easy to perform. As standard, the miter saw comes with a cutting blade wrench, a carbide cutting blade and a bag for dust collection.

The metal detent plate that comes with this particular model has 11 positive stops which aid fast set up. This lets your work keep flowing as you do not have to stop and constantly readjust. The same is true with miter angles thanks to its cam lock handle which allows for the detent to be overridden. This feature allows the operator to adjust the setting of the miter with the cutting blade falling into any of the miter detents.

Its miter capacity is relatively wide and so enhances the DW715’s versatility further. Both to the right and to the left, it ranges from 0 – 52 degrees. The miter saw has been designed with a tall fence that is capable of supporting crown molding that is over 5 inch, nested vertically, and base molding that is over 6 inch vertically placed up to the fence.

The fence can be quickly and easily slid out of the way when you are making bevel cuts. In regards to bevel cuts, this particular DeWalt model can make precise and clean bevel cuts, at 45 degrees, through lumber that is as big as 2 x 8 inch. These cuts can be made at a range of between 0 – 3 degrees to the right, and 0 – 48 degrees to the left. This gives you the capacity to tackle bigger jobs as and when required.

It has several metal bevel stops between 0 – 48 degrees, which further enhance the miter saws versatility and allows you to quickly and easily access common angles to make bevel cuts.

The main thing to appreciate with the DeWalt DW715 15 amp 12 inch compound miter saw is its ability to bridge a gap from the less powerful and smaller models to the larger ones which lend themselves to more heavy use and on larger work pieces. Its wide miter capacity is also worth some appreciation. The DW715 is massively versatile in that it can make cuts between a range of 0 – 50 degrees, both to the right and to the left.

We also like lightweight design of the miter saw as it is very easy to pack up and move around from job to job. The carrying handle is a nice touch and, again, makes transporting the DW715 that bit easier – something you appreciate at the end of a long day. The feel of the miter saws angle adjustment is very solid thanks to its detents.

Its mechanism for locking the angles is sturdy and adjustments can be made seamlessly, meaning you do not have to keep stopping and starting adjusting your work piece. It has a very wide bevel cut capacity and any adjustments to the angles can easily be made.

When using the DW715 everything feels nice, smooth and stable. You always feel in control. The DW715 is also very reasonably priced for a miter saw of its quality. 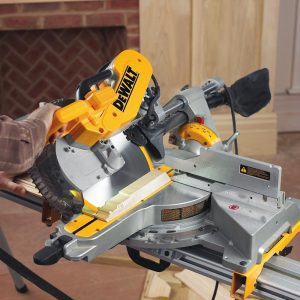 Our DW715 DeWalt review has shown that this is a great miter saw that sits somewhere in between the more basic ones and the high end ones. This makes it great for home DIYers and professional tradesmen alike. It is a bit of a step up from the more basic miter saws which are generally less powerful, smaller and only slightly cheaper.

This review has also compounded our view that DeWalt most definitely have a commitment to developing and manufacturing high quality miter saws that have all the right features and user conveniences.

What you are getting with the DW715, for the price, is a miter saw that looks like and performs like one that is twice its price. If you appreciate a more basic miter saw, that comes with basic features but is capable of generating plenty of power and boasts a wide cutting range, then this one is for you.