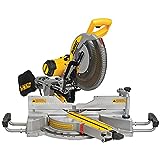 We’re comparing the DeWalt dws779 vs dws780 miter saws to judge functions and features with the aim of providing our recommendation as to which one is best.

Boasting features from both radial arm and chop saws, miter saws combine them to produce a cutting tool that has greater portability than the radial arm saw and greater capability of the chop saw.

This combination of functions enables the operator to leave their work piece stationary and instead move the miter saw across it to make a range of bevels, cuts and miters. Miter saws are the perfect tools for experienced tradesmen, including those working with trim molding.

They also lend themselves to home DIYers that require the ability to cut vertically at 90 degrees and to work with trim molding.

It is only when working with seriously detailed crown molding that a miter saws usefulness and quality shines through as they have the capability to produce highly precise compound miter and bevels.

Differences Between the Dewalt Dws779 vs Dws780

Now let us take a close look at the differences between the DWS780 vs DWS779, which at first sight are practically identical…apart from one thing.

This is the cutline LED work light, which is DeWalt’s alternative to a laser cut marking mechanism. A super bright LED displays a shadow as a marker for were the blade will cut. Accessory lights can be purchased online an attached to miter saws to provide this same function.

DeWalt promote this as superior to a laser guided systems that are not always accurately aligned as they can often be knocked out of alignment.

Other than this, every function and feature of these two saws is exactly the same. You can even compare their respective sets of instruction manuals to see that their specifications are identical.

Further to this, we examined the illustrations of the features of each sliding compound miter saw and they, again, were identical – other than replacing ‘DWS779’ with ‘DWS780’ and including a small section on the cutline LED work light.

It is also true that the size of the work piece each of the DeWalt compound sliding miter saws can cut is also the same, further compounding their similarity.

They are both well built miter saws and are capable of withstanding some serious work.

Let us have a look in more detail at the features of each, as well their pros and cons in comparison to one another.

This a sliding compound miter saw with a 12 inch cutting blade. The cutting blade that comes as standard is generally fine for more basic jobs but may not offer the quality of cut that most professional tradesmen require.

The DWS779 has an adjustable detent plate that has 10 positive angle stops that aid improved productivity ensure greater accuracy of each and every cut.

Its motor is a powerful 15 amps which has the capability of generating up to 3,800 RPM and delivers both extended durability and power.

The miter saw has two steel horizontal rails with a clamp to hold down your work piece to provide a precise and accurate cut.

Its dust collection function is super effective in collecting more than 75% of all dust and debris generated.

Check the price of the Dewalt DWS779 here

The DWS780 is also a sliding compound miter saw with a 12 inch cutting blade and boasts an innovative belt driven gearbox design to increase its cutting capacity vertically.

Again the standard cutting blade is pretty basic and if you are an experienced tradesman working on jobs that require high quality cuts then you may need to replace it.

It too has a high powered 15 amp motor that is capable of generating up to 3,800 RPM and delivers both extended durability and power.

The miter saw is armed with an XPS integrated positioning system that provides the operator with an adjustment free cutting line indicator for precise cross cuts.

The quick released setting for bevel stops gives the operator greater accuracy when making bevel cuts and make changing the angles of the bevel (up to 49 degrees both left and right) quick and easy.

It comes with a long double slide fence that provides maximum support when working with larger work pieces at a variety of different angles.

The DWS780 lightweight and compact design makes it perfect for moving around the work site and transporting to different jobs.

Check the price of the Dewalt DWS780 here

We’ve researched what others, including users, think and have said about these mitre saws so that you do not have to.

On the whole it is very positive, with both being highly ranked by the vast majority of tradesmen and DIYers who have experience of using them.

This is not a huge surprise given DeWalt’s reputation for manufacturing great quality tools.

One of the positives mentioned was the fact that they are ready to use from straight out of the box with no adjustment needed for accuracy of the cutting blade. Users talk about being able to immediately put the miter saws to use.

Although this is the case, we do recommend that you always check to accuracy of the cutting blade before use – especially when working with highly expensive crown molding.

The two saws have marking gauges that are highly durable and visible, and even have positive detents which make setting up the saws for making the more common made angled cuts very simple.

Users also commented on the saws ability to double bevel which allows them to keep their work piece in place whilst moving the saw. This provides the operator with an increased level of accuracy as they do not have to readjust and clamp down the work piece multiple time when work on it.

Both of the DeWalt miter saws power were also complimented by users. They both have a 15 amp motor that is belt driven to provide the necessary power to cut through the toughest of work pieces.

However, there are some negatives that came up with users. The main gripe amongst those who had experience of using these miter saws was their dust collecting abilities.

Contrary to what DeWalt boast (that they collect more than 75% of all dust and debris generated), many users deemed the bag system that come with each of the miter saws not to be very effective.

Our experience does suggest that this is a problem for many power tool manufacturers and you will be hard pressed to find a dust collection system on any type of saw that is fully effective.

Another issue was warped fences. We advise that you always check the miter saws fences before using either one. This is also true of the base; it should always be checked to make sure that it is square before use.

With these couple of issues in mind, here are some of the best miter saws that are also high quality and worth your consideration:

With these two DeWalt miter saws being so similar (they are practically the same saw), it is a pretty easy decision to answer which miter saw is best – it is the DSW779.

This is solely due to the fact that the DWS779 is the cheaper of the two miter saws.

Although the DWS780 does come with the cutline LED work light, which is a useful feature, it does not warrant the difference in price between the two miter saws.

The DSW779 has all the power you would ever need for most jobs on a worksite or in the home, as well as providing the level of accuracy required to tackle the most complex of cuts in a variety of materials.

Check the price of the Dewalt DWS779 here